GloBee humanitarian aid in all directions: we’ll explain you where the food trucks were delivered

This time, we organized the delivery of aid in various directions:

In cooperation with partners, we managed to deliver potatoes to another initiative – “Borsch for the Armed Forces of Ukraine”. Volunteers promptly prepare dry rations and send them to the military on the front lines.

In addition, we sent products to the “Field Kitchen B-50” organization, which prepares hot meals and feeds displaced people with lunch.

Thanks to our daily work, we are feeding more and more people. Now it is important to help and support the residents of peaceful cities. Let’s unite with international partners and volunteers! 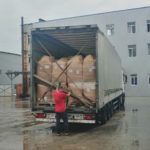 Previous Post A truck with humanitarian aid from Germany was delivered to Ukraine.