Boston Mayor Michel Wu and Kharkiv Mayor Igor Terekhov outlined the directions of partnership between the cities via video conference. Closing the skies over Ukraine as soon as possible, new sanctions for Russia, humanitarian aid to peaceful Ukrainian citizens, the future reconstruction of Kharkiv, these and other issues were fully agreed upon by the mayors. The talks were organized by GloBee International as a part of Cities Partnership Project.

“We do not have any other goal but to stay alive and to win. We are a strong nation and we will obviously win, but we need international support.

Knowing that Boston has representatives in Congress, I would like to ask you to step up your efforts against the aggressor country. This could be a means of putting pressure on the Russian Federation to end hostilities. The day before yesterday, I asked the mayor of New York too. I believe that a consolidated stance among America’s largest cities could be beneficial”.

“I cannot even put in words how much the residents of Boston stand with you. We have a strong Ukrainian community here in Boston.

We will do everything we can to support you, increase the pressure on the government and help end this senseless, unconscionable war. We will work on humanitarian aid, we will find an opportunity to send you the necessary machines [to clear the rubble]. We will continue to beat the drums and demand support”.

Full video of the conversation and the impression of Boston.com columnist Christopher Gavin: “‘Total destruction’: On call, mayor of Kharkiv, Ukraine, tells Mayor Wu how his city has soldiered on”. 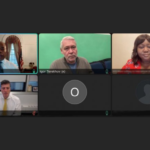 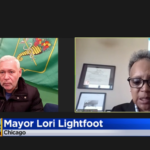