Kharkiv received $ 880,000 worth of medicine from Chicago as aid

Kharkiv Mayor Igor Terekhov spoke about this on Hromadske Radio.

“I talked to three mayors of America’s largest cities: the mayors of New York, Boston, Chicago, and the day before yesterday we received $ 880,000 worth of medicine for Kharkiv. I divided them between the military hospital and our hospitals”, he said.

The Kharkiv mayor’s talks with the mayors of New York, Boston and Chicago were organized by GloBee International as part of the Cities Partnership project.

The full text of Igor Terekhov’s broadcast on Hromadske Radio in Ukrainian is available here. 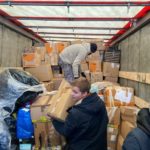